Tradition says that its name comes from a fact of battles, though little known, occurred in the Middle Ages:

The castle is perched on a hill and its name (“Vidone” by Guidone) brings to memory the Germanic feudalism. Legend has it that the local lord of nomeGuidone was contending with the lord of a castle near (Rocca Monte Varmine) and had requested help from brother named Conrad, in turn master of another castle restaurant nearby. The messenger delivered the message would help uttering the words “Run Corrado Guidone fights.” Later the name Guidone would turned into “Vidon”, and hence the name of the town becomes “Monte Vidon Fights”. 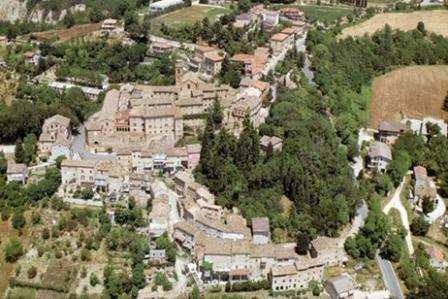