The origins of Montedinove seem to date back to the sixth century AD as it is considered probable and be built by refugees Ascoli during the Lombard invasion of 578, but the first certain document is only in 1039, when Longino of Azzone, Lombard feudal, donated to the abbot of Farfa supposes the city offida with 40,000 bushels of land. In the twelfth century, the abbot of Farfa Berardo III did rifortificare almost from scratch. 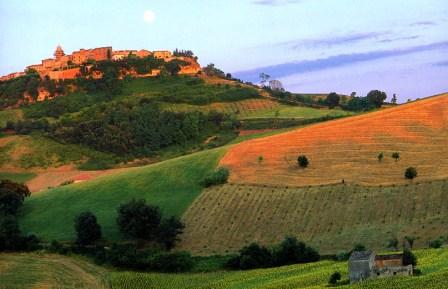 Besieged in 1239 by the troops of King Enzo, son of Frederick II of Swabia, Montedinove resisted for about two years. In a document of 1279 we find that Montedinove had its own municipal autonomy, with Podesta sent directly from the Church. He remained loyal to the Pope and Farfa until 1585, when Pope Sixtus V incorporated in goods of the Church that remained of Presidato Farfense and was the Presidato Montalto, which was part of Montedinove. The municipality of Montedinove followed the historical course of the Papal States until the unification of Italy in 1861.