Amandola is located 550 meters s. L.M. on the left of the river Tenna between rolling green hills down towards the Adriatic (55 km.) and the eastern slopes of the Monti Sibillini which majestically dominate giving a picturesque location in the National Park of the same name.

The city’s history starts in the configuration of the urban development in the communal, while not lacking important evidence related to the Neolithic and especially the Roman period (bronze vase DINOS the V sec. BC and the Augustan period, both preserved the Museum of Ancona). 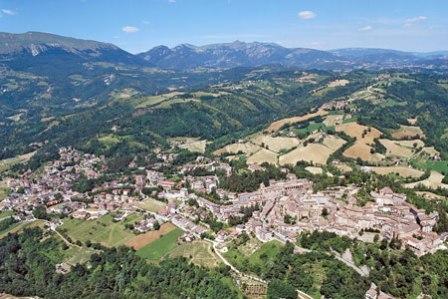 St. Augustine’s Church (Sanctuary of the Blessed Antonio) that presents a remarkable portal (sec. XIV) Marino Cedrino and the tower of MP Lombardo (1468).

Church of SS. Trinity inside with a wooden crucifix invoice Venetian and the roof supported by trusses.

The pristine environment of the Sibillini National Park, which is surrounded Amandola, invites to interesting excursions along picturesque routes and nature trails marked.