The Monteleone is believed existed in ancient Faleria, or Falerio, but in two separate buildings forming a single municipality, the first largest, called Monte Legumes, the second with the name of Torre de ‘Casoli. In the year 533 Eutherius, King of the Lombards, occupied the old Faleria also won the first building of this town. Torre de ‘Casoli argued valiantly twelve years of siege commanded by such Leone. Subsequently, the municipality was called no more Torre de ‘Casoli, but Monteleone to leave, with that name, to posterity the memory of his valiant defender. 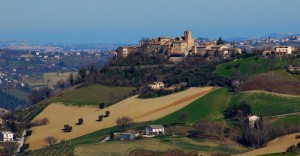 Castle walls, some remains give an idea of ​​what was once to be the castle. Municipal building, entirely restored, houses a “Madonna and St. John” derived Crivelli (XV century).

Parish Church of St. John the Baptist, with bell tower consists of a hexagonal tower (sec. XIII-XIV) already part of the defense walls. Its elegant terracotta bill also has an interesting lintel paleo-Christian. Inside there is a precious silver cross signed by Bartolomeo from Montelparo (1524).

Crucifix Church or Our Lady of Mercy, built in 1526. It has Romanesque parts and guards inside the most interesting testimony of the painter Orfeo Presutti (1548): a fresco of the “Last Judgment” which covers an area of ​​21.45 square meters.