Some local historians say that was founded by the Sabine Massignano in pre-Roman times; according to others would be a suburb of the ancient Roman city of Cupra and extended. If, however, traces of pre-Roman life are few and confused, the same can not be said of the remains from Roman times. Since 1168 it has documented the existence of the mighty castle of fork (which today remains a part of the tower and some ruins) built by the counts of Ghibellines Aspromonte and Montefiore and later in the hands of the Bishop of Fermo. For a long period Massignano remained independent, but in 1258 is subdued in Fermo. In 1334 he was attacked and sacked by Rinaldo from Monteverde, tyrant of Fermo and was thereafter fought alternately between Ascoli and Fermo. In 1532 the Ascolans stormed Massignano who thereafter remained peacefully under papal rule, until the time of the French government in 1797. Restored in 1816, it was one of the Marche which fought for Italian independence. 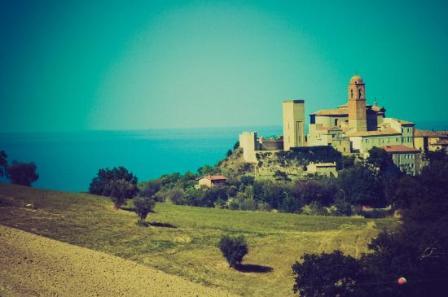 Fortress Fork 2 km from the historic center; Church of SS. Adauctoanticamente happy and dedicated to St. Atto, rebuilt in the ‘600 on Roman remains, which is the original part of the apse of the century. X; Town Hall was renovated in 1878, it was originally an Augustinian convent; Civic Tower was the steeple of the old church of the monastery dating back to 1572; in ‘600 the site was abandoned and later became municipal property.

Church of Santa Maria della Misericordia also dedicated to SS. Peter and Anthony. In neoclassical style was completed in 1842.