Venagra ancient city Picena and Roman military station along the consular road from Nocera Umbra in Ancona, was destroyed by the Goths in the early sixth century. 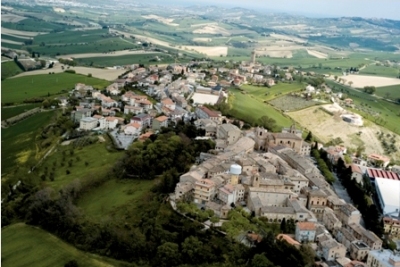 The fugitives took refuge on the hill where now it Montefano (etymology derives perhaps daFanno, name Sabine protect the colony Veregrana where there was also a temple.) It has flourished around the small town.

Church of St. Philip Benizi of the Servants of Mary and the convent: in the latter was set up a National Center for Biblical Studies dedicated to Giovanni Vannucci, great biblical scholar.

Collegiate Church of St. Donat: Baroque, has a brick façade with two orders. Inside, above the choir, there is a painting representing “San Donato and San Giovanni Napomuceno the sides of the Assumption”. Under the main altar are buried the remains of St. Honorius, below that of Sacramento the remains of St. Severus, martyr of English origin.

Town Hall: the second half of the nineteenth century. In the council are the arms of the cardinal protectors. In the same building there is the theater, of small proportions, but inspired by the elegant lines of the Fenice in Venice, with which he remade the architect Viginio Tombolini (technical director of the Phoenix). The painting is part of Domenico Bruschi (in ‘800) who frescoed the Synagogue of Rome. Well it preserved can be visited in the morning, addressing the staff of the Municipality.