Tradition has it boasts Roman origins and it handed down the name “Veregra”.

Between the valley of the Chienti and Tenna in the province of Fermo, in a hilly area it is this small urban center, typical of medieval architecture that characterizes all the villages of this vast territory.

They are not certified its ancient Roman origins, while we can safely say that the village of granarius was donated to the Abbey of Farfa in the ninth century by emperors Carolingian Louis the Pious and Lothair I and is since then that becomes a “reserve of wheat” of ‘ abbey.

From this period dates the construction of the Crypt of St. Hugh today below the Church of St. Philip and St. James the eighteenth-century period was probably built on a previous construction Benedictine and even an even earlier, perhaps a Roman building. 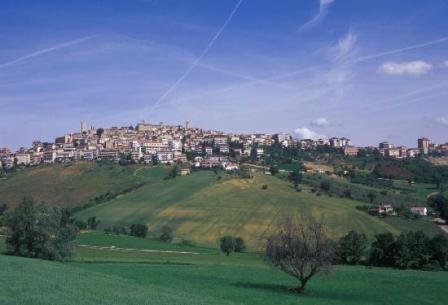 The Crypt has a barrel-vaulted nave with frescoes today still visible on the walls of the apse and this may suggest that a building was lavishly decorated. In the only remaining cycle is possibie admire a stylistic evolution painting featuring three centuries of history, with the first dating dating back to 1299, a second half of the ‘300 and a last cycle dating from 1500. To go erdute unfortunately were the wall paintings depicting a cycle of episodes from the life of Jesus and the saints Benedictines.

After the dominion of Farfa in Montegranaro you sussegui to the nearby town of Fermo, and only in the thirteenth became an independent municipality.

It is at this time that dated back to the ancient Franciscan church dedicated to the saint of Assisi with the adjoining convent outside the city walls, which then collapses and reconstructions were rebuilt in the ‘600, in the convent today houses the municipal library, and this took the name of Palazzo Franciscans.

Like every center of Brand Montegranaro also sees succession clashes between different factions and lords, from 1387 was dominated by Zeno family in Venice, then he was Still ally in the fight between Guelfi and Ghibellines, after which suffered like other neighboring towns of Marca domination by Francesco Sforza until 1445, only to see the return of the papacy to the Napoleonic domination and so on as the history tells us return to the Papal States and the Kingdom of Italy to the present day.

In 1777 he was a sanctuary dedicated to the worship of the Capuchin friar made Holy S.Serafino Montegranaro (1540-1607) that the hometown adopted as patron saint. To date, the body of the Franciscan saint is kept as Ascoli Piceno.

The ‘800 the city of Montegranaro developed what today is still his vocation and the main economic production and that the footwear industry.

In the early 1800s the characteristic “CHIOCHIERA” was the strip of cloth that was produced esvlusivamente by workers of the place, a tradition which now feeds an economic sector of a large scale throughout the area Fermo.

Besides church architecture it is worth a visit an ancient fortified mill dated before the year 1000 called the Tower, built in the plain of the river Chienti in the homonymous district.

NOT TO BE MISSED:

Church of SS. Philip and James: the crypt with frescoes (XIII century) dedicated to Saint Hugh, the first Christian church of the place. The figures, some of them detached from the walls and transferred to wooden support, feature episodes from the life of Christ.

Churches of SS. Francesco and Salvatore: with elegant Romanesque portals, it has only recently come to light in its entirety.

Footwear industry known throughout the world with its more than 600 companies and about 5,000 employees is the driving force of Montegranaro Marche footwear and one of the major footwear production systems worldwide. The high production and excellent manufacturing place Montegranaro which international center of the shoe.