On the eastern side of Mount Carrier is located Montegallo. It was formerly Bishop Sanctae Mariae in Gallo (1357), distributed in 23 villages on the territory raises its center to the “Castle of Leap” (strategic positioning against the Piceno and in relation to the two streams Fluvione and Rio). Transit country for the trafficking of pastoralism and commercial (Route of the church of Santa Maria in Pantana), was part of the connection system of the foothills (Amandola, Montefortino, Montemonaco), which ensures economic vitality to the entire population. The architecture is linked to the presence of the Benedictine monks, who settled in Montegallo before the birth of the municipal courts.

Church of Santa Maria in Lapide rebuilt in the second half of the fifteenth century, has architectural features due to the work of the Benedictine monks. The building plan is a Latin cross with a single nave, has slits, Pusterle and shelves to ensure the control and defense of the chase. 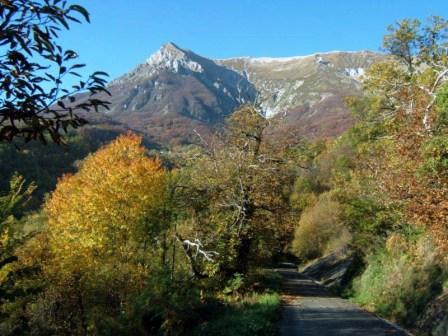 Church of Santa Maria delle Sibille (ninth century) contains frescoes of Sibille Phrygia, Delphic, Ellespontina and Agrippina. Example of how these have created a marriage between the sacred and the profane.

Building Branconi fine sandstone building, is home to the CEA (Environmental Education Center) which conducts recreational-educational purposes to promote the area. Very interesting – teaching the Ornithological Museum (at Dodge) and the Museum of Rural Life (in Uscerno).