BLOSSOM VALLEY DELL’ASO
Archaeological findings show an ancient Roman presence. On the origins of the name are several hypotheses, among other things, that it may be the city of Urticinum, cited daPlinio in Naturalis Historia and destroyed by the Romans in the third century. B.C.

From the ninth to the thirteenth century it is part of the domain of Farfa and is equipped with fortifications; then enters the jurisdiction of Fermo, which will follow until the unification of Italy. The village is divided into two main groups, one of which was born the oldest feudal castle and the other around the church of St. Jerome, an area that was fortified in the fourteenth century. 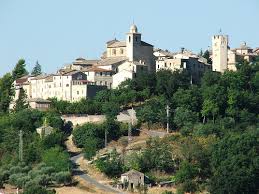 Carmine Church founded in 1725 by brothers Papetti, preserves woodcuts (Way of the Cross), a “Madonna del Carmine” Maratta. The same family can be attributed the construction of the Fonte da Bora (1608).

Church of Santa Maria del Soccorso, built in place of the disappearance marquee church of Santa Maria delle Grazie. Preserves a fifteenth-century fresco, the painting “Madonna and Child Enthroned with Saints Girolamoe Sebastian, Francis and Augustine” performed by Vincenzo Pagani, still under the influence of the school crivellasca, a Way of the Cross in the Roman school and an organ of 1747 Master Attili of Ortezzano.

Church of St. Jerome dedicated to the patron saint, originally very small, it was rebuilt in the second half of the eighteenth century.

Remains of the Castle built around a watchtower (ninth century) placed on today’s home Malaspina.