Caldarola owes its name probably, to the Latin term “steam bath” with which indicated the “room with the hot tub” of the spa.

Local tradition traces the origins of the country to the fourth century AD when a group of Christians, fleeing persecution, he built a primitive urban center. Most likely the center Caldarola arose as rural village at the foot of a tower defense Lombard or Byzantine law prior to the IX-X century. At the end of the twelfth century the story Caldarola fits in the struggle between the Papacy and the Empire. The Pontiffs to ensure the loyalty of Camerino, in fact, granted in fief the territory of Caldarola state Camerino. 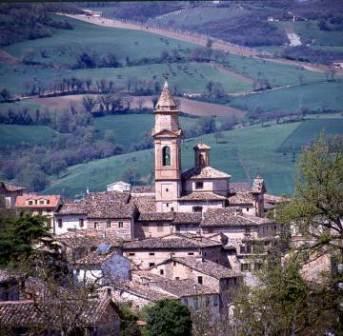 Only at the beginning of ‘400 the country managed to gain independence sanctioned by Pope Eugene IV. The big boom came, however, in full ‘500 at the hands of the Counts Pallotta and in particular the Cardinal Evangelista, who became prefect of the building of St Peter’s under Pope Sixtus V, enlarged and embellished the family castle and transformed radically urban center that, from modest medieval castrum became a spacious Renaissance town. The direct subjection to the Church of the town of Caldarola lasted until 1799, when the papal rule was overthrown by the French Revolution.

After the brackets “Napoleon”, the country returned to the Papal States until 1861, when the Marche land was annexed to the Kingdom of Italy.