From the top of the country, commonly called “Pincio” you can enjoy a wide panorama that stretches from the Adriatic Sea to the Sibillini mountains, from Mount Conero to the Gran Sasso of Italy and, at night, you can see the myriad lights of the many surrounding countries . If you are lucky you can see the moon reflected on the Adriatic.

The foundation of this center on the hill of the middle valley of Tenna is of prehistoric origin, there have been numerous finds that testify of Roman settlements and piceni; then with the arrival of the ecclesiastical authorities the center, located in a strategic point, he joined the possessions of the Abbey Farfense that decrees certainly economic continuity but which then dictates the historical events over the centuries. 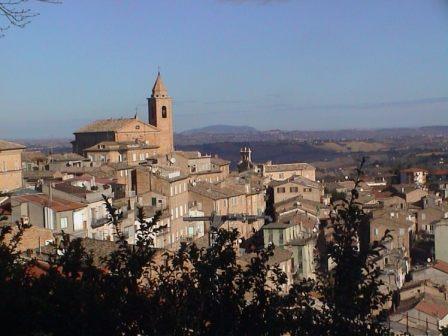 During the Medieval period the urban structure of the city, when the Benedictine monks of the abbey founded the convent and the present Church of St. Francis, developed as towns all around the ecclesiastical center welcoming the first inhabitants settled on a foundation of Monte Giorgio.
after being feud Farfense became a free municipality and as the center of each stop Ghibellino with a succession of fights and reconciliations between the Lords allied with neighboring Fermo.
An economic input gave it a Jewish community settled from Florence to Monte Giorgio, they established here their activities tanneries, the production and processing of wool and fabrics and so gave a new boost to the economy of the small town.

His story then unites with the center of each of the stop and the March of Ancona, passed under papal rule until the Napoleonic era and the Risorgimento until the unification of Italy.
The city walls of the thirteenth and fourteenth centuries. form an almost triangular route that encompasses all the historical center, with the classic four-door access to every point of the compass.

The Town Hall is currently attached to the Church of St. Francis, named after the Saint of Assisi by Pope Sixtus V, yet it houses a monumental staircase by Panfilo Gentile; the aforementioned Church of S.Franceso thirteenth century. was built on the highest part of the town inside the walls, then it restored in the sixteenth century. in the style of today it preserves a chapel in Gothic style also inside a precious cycle of frescoes by Antonio Alberti from Ferrara dating from around 1425.

The Church of the Holy Savior is from the end of ‘300, previously demolished in 1827 to now preserves the original arched entrance portal. Fragments of painting and architecture of the ancient Augustinian church complex are today visible in the adjacent input today for use by offices.
In the town there is also a Municipal Theater named after the illustrious countryman Domenico Alaleona musician, obtained in the former municipality and today still preserves the ancient city tower; only seven years before the City acquistÃ² the Church of St. Francis which today hosts in the former monastery.

Arco (XIV century) is all that remains of the portal of the church of San Salvatore, once attached to the convent of the Augustinians, now the post office and school. The church is also the sacristy with a beautiful fresco of the “Crucifixion”.

Church of St. John and St. Benedict its construction began in 1789. It contains works by Luigi Fontana, the “Birth of St. John the Baptist” (XVIII century) and an organ Morettini 1837.

Municipal Theatre built in 1878 on the area of ​​the Town Hall, is decorated inside with frescoes, stucco and gilding. Adjoining building is the town tower called “Torre de ‘Palazzu”.

Sparrows palace noble residence of the eighteenth century, houses the permanent exhibition of works by sculptor Gaetano Ursu as well as temporary exhibitions and cultural events. In summer it is the point of tourist reception.