The castle was founded by Malugero Melo, son of the Dragon Norman Count of Apulia, under Pope Alexander II. The wife named Morica bore him three children, to whom the Count, in homage to his wife, he gave the name of Morico, hence the name of the country. In 1317 the territory was ceded in Fermo which followed almost all the same historical events.

Polygonal tower (XIV century) is located in the historical center, part of the original crenellated castle of the ‘400.

St Francis Church retains a “Deposition of Christ”, oil on canvas of the Venetian school of the seventeenth century and a processional cross of the XVI century. 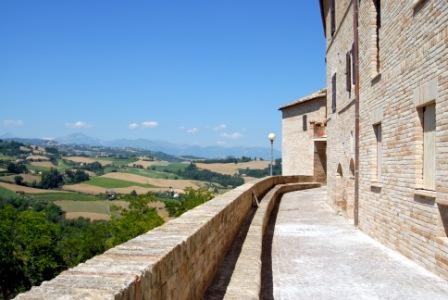 Parish church in the hamlet of Sant’Elpidio Morico Sant’Elpidio. Keep an altarpiece that, in just three central panels is by Vittore Crivelli (1496), while the other panels, of mediocre local artist, were added in 1659; a “Virgin and Child” marble statue (XVII century) and a marble cross reliquary of art Marche (XV century).