It ‘a small town perched on a hill and still retains its medieval appearance.

Has three urban: the Capital City and the villages of Torchiaro and Capparuccia. It spans three hilly ridges between the rivers and streams: Tenna Ete Vivo, the Rivo (between Ponzano and Torchiaro), the Cosollo, the Posenzano.

Archaeological finds from the Roman period indicate the presence of an urban core since 300 AD. In the seventh century. settle the monks of Farfa, organize a curtis and build a church and dedicated it to St. Maria Mater Domini. The current building is to be traced back to the years 1128 – 1148. In the second half of the sixteenth century. starts being called also of St. Mark. 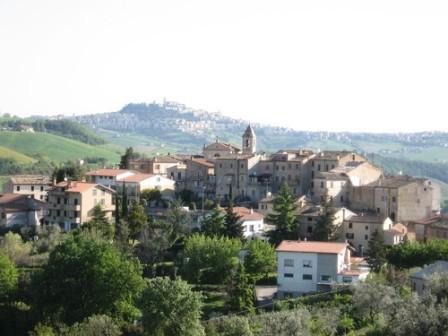 Castle Ponzano in 1416-1443 suffered devastation by the Malatesta and Alessandro Sforza. In 1570, Pope Pius V separates him from the jurisdiction of Fermo and makes it common for free, it is “ground” with the power to elect its own mayor acting as Praetor, authorizing it to impose fees and collections. The Bishop of Fermo is simultaneously appointed perpetual defender of “Terra di Ponzano”. On June 5, the Ponzanesi assembled in Parliament elect their first Podesta, for the second half of the year, Marco Attilio Albertini from Monterone. From this specific episode she was inspired the Historical “From Castle to City Free – 1570”) which is held in Ponzano on the last Sunday of July each year.

The 24 August 1862 takes its current name of Ponzano di Fermo. The name “Ponzano” appears in the list of common and castellli which the Card. Albornoz, Legate of the Pope to reorganize the Papal States in the Marche, 22 September 1355 addressed the invitation of convocation of Mayors or their representatives for visting Fermo to take oath of allegiance.