It seems that the city of Visso, identified with the ancient Vicus Elacensis, was earlier in Rome and in Rome has given people such as Vipset (which took its name from Visso), which was the Roman consul. 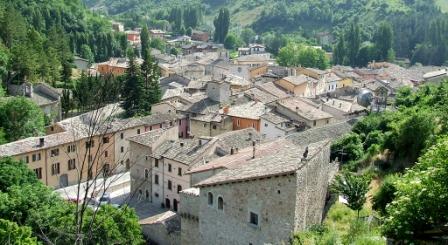 In the early ‘200 the town was partially destroyed by an earthquake, so the hill was abandoned and the new houses were built in the valley between the banks of rivers, Ussita and Black. United to the Duchy of Spoleto, depended then by the Earls of Upper Black feudal lords, until it organized a free commune. Autonomous, proud and belligerent, he was always fighting, until the middle of the ‘500, with the neighboring municipalities of Camerino, Montefortino and Norcia, with which, in particular, had to settle every question with the famous battle of Pian Lost, won by Visscher in 1522. In 1828 he earned the title of City by Leo XII. In 1860, with the unification of Italy, Visso was detached from Umbria and the Marches joined.

Palace of the Governors (XIV century, rebuilt in the second half of the ‘500): with outdoor porches, an inscription on the facade recalls the governorship of Peter’s Dome Mazzarino, father of the famous Giulio, minister of Louis XIII, and a coat of arms of the Boncompagni family draws ‘origin Vissana Gregory XIII.