Its origins are ancient, as evidenced by some findings of pottery dating back to Cività Piceno, while the Roman period are the ruins of the ancient Baths, disappeared in 1600 after a landslide caused by torrential rains that swept the country. During the Middle Ages Loro Piceno belonged to the Abbey of San Clemente in Casauria and in the twelfth century passed before under the feudal lords of Brunforte and then Gualtieri. The time remaining portions of the walls and the Castle of Brunforte. After being part of the March of Fermo, Loro Piceno followed the fate of the Papal States until its annexation to the Kingdom of Italy. 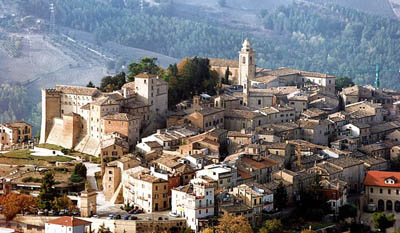 Castle Brunforte: above ancient defensive walls, stands the “Rocca” medieval, commonly called “round”, the name was still the town. Inside not only was the house of lords Brunforte, but also the Justice Palace, the prisons, the place of execution, a windmill and what is necessary for the performance of normal activities. lost fnzione the defensive because of the changes of the military, the fortress became lentamnte in place in the public domain and of civil room, while in the Castle of Brunforte settled the municipal authorities of the country.