The ancient Prolaqueum welcomes visitors and holiday makers with a very special warmth that stems from the sacredness of the guest, deeply felt to this day by the people of the Marche. The origins of Pioraco to date back to prehistory: numerous finds testify primitive human settlements in the caves and its mountains. Was later ancient “statio” Roman by the name of Prolaqueum. In the Middle Ages “it is the walled castle and he has the tower”, characterized by the ancient workshops for the manufacture of paper. It was also fortified garrison of the Duchy of Camerino during the Da Varano, these passed to the Papal States and followed its fate. 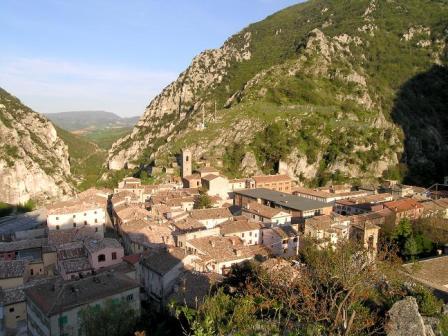 Museum of Paper and Watermark

The watermark is the soul transparent paper. It should have been a way to distinguish the origin and quality. Subsequently he served and still serves to prevent falsification of security paper, including paper money. The watermark is larger or smaller amounts of fiber layered at the reliefs or grooves specially structured on a wire cloth.

The exhibition consists of a collection of artistic watermarks, watermarked paper, historical documents, equipment of different ages (mostly belonging to local paper mills Miliani Fabriano) testifying to the long evolution of papermaking from its origins to the present day. Opened on 1 May 1984 was made by Angelo Gagliardi, Gualtiero Barboni and Alfranco Capponi with material provided by the City, the Cartiere Miliani Fabriano Spa and family-Bartocci Mascambruni.