The territory of Corridonia in the year 713 of Rome, was assigned by the triumvirate Octavian, Lepidus and Mark Antony to its veterans returning from the war against Brutus and Cassius, thus becoming a Roman colony. Destroyed after the invasion of the Goths or Lombards was rebuilt by the survivors and called Castrum Pausuli, which is signaled in parchments 995-1229; after that date is no longer any news of the city name. Light cues, such as to assume the continuity of life in the new center of the ancient Pausula Montolmo, are found in the history of the latter. 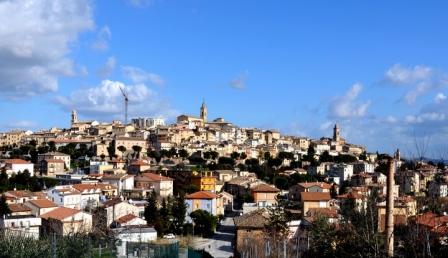 Mons Ulmi, of which there are the first signs in the scrolls of 1115, owes its name to an elm tree planted by the monks of the Holy Cross near the Church of Santa Maria in Castello. Quickly for the many privileges granted by the popes and the transfer of rich families, the country became “considerable”. The town was chosen for decades as the headquarters of the General Curia of the same brand and was the only country of the papal province who supported with the blood of the reasons the Holy See against Francesco Sforza. The coming of the Sforza was the beginning of the decay of the country, plagued by many ills, it has never risen to its ancient splendor. In 1851, for his merits towards the Church, he came to St. Pope Pius IX erected in the city and was given back the name of Pausula. In 1931 he was named Corridonia, for giving the origins to Philip Corridoni, union interventionist.