The first core of the town grew around the abbey founded in 1080 by the Benedictine monks of San Pietro Ferentillo (Terni).

In 1164 Frederick I donated it to the Canons of the Cathedral of Fermo. In the era of the struggles between Guelfi and Ghibellines he took refuge there the noble Florentine family of De Alleis whence primitive Latin name of S. Petri De Alleis. In 1443 the City Council, only in the Marches, resisted for more than a month siege of Francesco Sforza. It returned the orbit of Fermo, followed its vicissitudes. 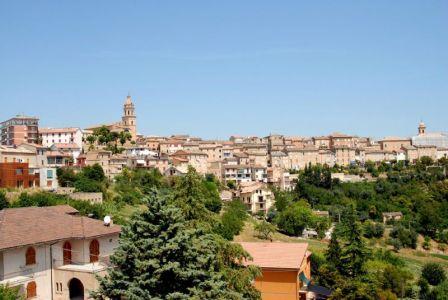 Church of St. Francis already convent of Friars Minor by the quiet courtyard and the classic arcade. Baroque church from which rises a majestic bell tower. Inside keeps an altarpiece of the ‘500 attributed to Giuliano da Fano, some frescoes of popular art of the century and an organ Callido.

Palazzo dei Priori, we note in the town theater built the tower in the fifteenth base has a small Gothic chapel rich in frescoes depicting the Annunciation of Our Lady.

Town Hall retains Code parchment of municipal statutes dating back to 1482 written in Gothic minuscule (one of the few still in Italy); a precious icon of Mary of the late ‘500 and cineraria Roman family of Vezzi dating from the second century BC