At the origins the village of Francavilla d’Ete was made by Castle only equipped with six towers embattled “Guelph” with a single door, that what is now the clock, probably, if you look at the gap, it had to be drawbridge …

The current north gate, made from the floor of the town hall, was opened in 1775 under the name of Porta Nuova. The village life took place always neilimite Castle and, only when the time was propitious and safer life, the people came out and began to build in the streets. Thus arose the 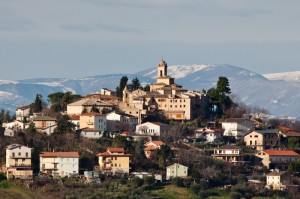 Borgo San Carlo and a row of buildings parallel to the south facade of the Town Hall and in continuation of the Palace of the Archbishops of Fermo, called “Palace of the Cardinal.”

Town Hall located in the area which was the highest court of the castle dates back to a distant era. In the southwest corner is set one of the six towers of the castle dating back to 1140. The palace was always the seat of the rulers of the country (priori gonfalonieri, mayors, mayor) and was severely damaged by the earthquake of 1943. With the war going on, the lack of brick material and cementing, were only made repairs and rebuilt the roof eliminating the third floor.

Public clock is located in a compartment above the door to the south of the main square (the ancient door of the Castle) topped by an iron frame that holds the two bells of the hours and quarters. Such embedding replaced in 1915 a beautiful tower sailing.