You can trace the origins of this town back to Roman times, when the land was already inhabited by a colony of Piceni who settled here after the defeat of Strafone. 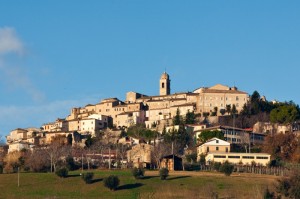 During the barbarian invasions he became district Franci, changing the name of Ars Rubetana in Monte San Martino. Surrounded by walls in the Middle Ages he took part in the struggles between Guelfi and Ghibellines taking parts of the latter, which earned him, by the Popes, the granting of privileges, not least that of being ruled by their lords of the family of related Proponzi with Brunforte. Around 1250 he settled permanently his community independent of any Signoria, eg only run short period of time he was placed under the governorship of the Da Varano, lords and governors of Camerino.

Exclusivity is the exquisite gastronomic “spumetto” cake made with egg whites, sugar and toasted almonds.