For its scenic location is defined Smerillo “roof of the Marches”.

And ‘home to a community of monks before the presence farfense. He speaks as of the Castle at the end of 800 A.D. His first lords were the noble family of Boce from Smerillo from which descend brave warriors. 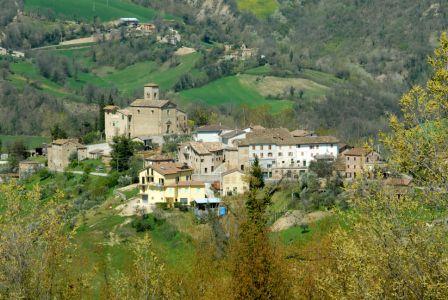 Buongiovanni in 1315, son of Boce from Smerillo and said “the Leader”, became bishop, administered the possessions Farfa which covered this territory also. From this family derived smerillesi warriors as Alberto Albertini, Albert II and Gualtieruccio, which widened their rule between the opposition of Guelphs and Ghibellines. In 1396, after a siege, they had the Fermo Smerillo. In 1409 the Earl of Carrara conquered and plundered the castle. With alternating success continued struggles with the nearby castles until the power of the Church not homologated also Smerillo.