Located 293 m of alt . on a hill to the left of the lower valley of power . Nucleus agriculture ( cereals , vineyards , vegetables ) and livestock (cattle, pigs , poultry ) , Recanati has a major factory of musical instruments and other industrial companies (wood, mechanics , clothing , plastics, etc. . ) . The typical craft is based on the processing of copper . His town has the characteristic appearance of the small towns of the Marche gathered on the hill ridges , with winding streets lined with noble buildings and beautiful squares . 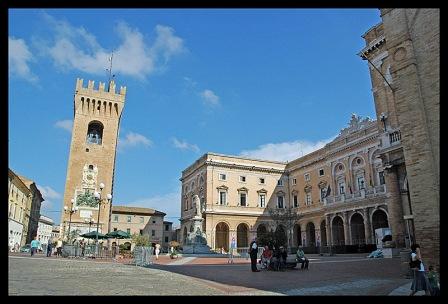 In addition to the churches of San Domenico , in the fourteenth century. , With marble portal of 1481 (inside , fresco by Lorenzo Lotto ) , St. Francis , of the fourteenth century . , Rebuilt in the eighteenth century . ( painting by Palma the Younger ) , the Cathedral of San Flaviano , the buckets. XIII- XIV, then rebuilt , and the former convent , now the church of Sant’Agostino , designed by Bibienas cloister with Gothic , Renaissance and preserved numerous valuable works of the Baroque era , among which the most important palace Leopardi, with staircase of rare monumentality and the Palace Carancini , also built on the design of Bibienas .

In the Town Hall there is a rich art gallery , with many works by Lorenzo Lotto . The Diocesan Museum is situated on the other hand , at the cathedral .

Recanati is famous as the birthplace of Giacomo Leopardi , which keeps many memories , in the family palace and places , and the opera singer Beniamino Gigli, which is dedicated to a small museum.