Born on the ruins of a Roman settlement, it contains in its ancient castle walls and rich Benedictine abbey, dedicated to St. Bartholomew (patron of the city) whose origins date back to the eleventh century.

Campofilone today retains many features of crenellated walls and a polygonal tower. Not far from the castle walls is the church of Santa Maria, Badia also, of the fifteenth century. Erected a free city under the aegis Badiale, around the first half of the twelfth century, this castle of the third class was almost always under the control of the bishops from Fermo. Under the Napoleonic Government its territory was divided into two areas: that of St. Philip, which included the territory to the south and that of Campofilone, the historic center and the Aso valley. 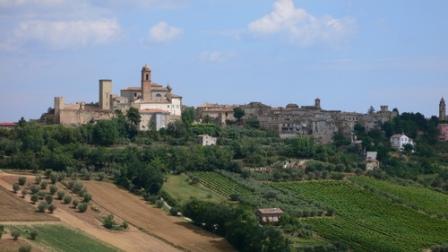 Campofilone is a “common source monastic”, that is, in the twelfth and thirteenth century, the people of the countryside, to escape repeated raids of the barbarians and robbers, Abbot obtained permission to take refuge within the first circle of walls, under the protection of ‘Abbey and army Badiale.

Characterized by a very simple recipe and very special. The product comes as a set of thin wires as “angel hair”, are cut by hand with a sharp knife by people with particular experience and skills.

The macaroni Campofilone have a very old tradition: when the Marche was essentially a cuisine made of unique dishes, macaroni were already considered a noble dish, which was served on special occasions. Already in ‘400 are cited the “macaroni for purposes”. Over time it has become famous for the Festival that takes place in Fermo thousands of tourists every year in August.