And ‘the only town in Europe with the territory coming within the perimeter of two national parks: Sibillini and Gran Sasso – Monti della Laga, the establishment of which bears testimony to the invaluable natural and cultural history. The territory, mainly mountainous, touches the 2,476 m. with the peak of Mount Carrier, lapiù high Sibillini and is divided into 13 hamlets that still retain important artistic and architectural. The name probably derives from Marx (fortress, stronghold). 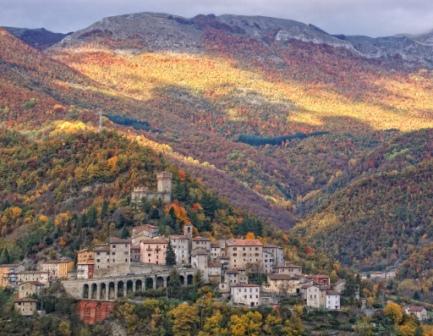 The medieval fortress, dating from the thirteenth century (where legend has it that he has resided the Queen Joan of Anjou of Naples), following the recent restoration is the destination of many visitors. As for the origins of the best hypothesis wants the direct descendant of the ancient “Surpicanum”, one of the centers of Piceno also listed on the “Table Peuntigeriana” between the Roman “For Martis” and “Ad Aquas”.

Church of Our Lady of the Snows in fraction Faete Crivelli school with frescoes attributed to Pietro Alemanno.

Octagonal church of Our Lady of the Sun in the hamlet of Capodacqua, with frescoes of the school of Cola d’Amatrice.

Church of San Francesco in the hamlet of Borgo, where he kept an excerpt from the original Shroud.

Church of St. Agatha in Spelonga fraction, containing a Turkish flag torn from the Ottomans at the Battle of Lepanto.

Medieval fortress (XIII century) it located on the highest point of the town and has a large multipurpose room. Also important archaeological finds as the Cippo landmark (first century BC to Trisungo), the ancient furnace (in Pretare, at the foot of Mount Carrier) and ilmulino water (in Capodacqua).