To explain the origin of the name of the village is used to the feudal rule of Frankish period and, as a further confirmation, there is the fact that the patron of Monte Rinaldo, St. Leonard, came from a noble family away vassal of King Clovis .

Nearby there was a castle Bucchiano, that between the twelfth and fourteenth century. It was of great importance and was the subject of contention. Behind the walls of Monte Rinaldo, Ascoli up to the door, it was built i 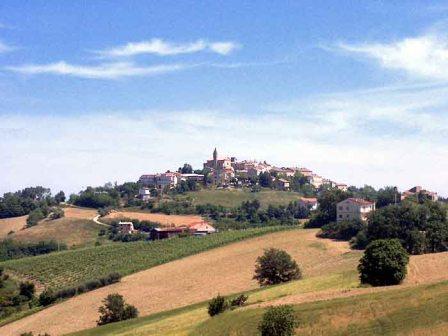 n the late fourteenth century Pievania S. Leonardo and S. Flaviano. The archaeological area of ​​”La Cuma”, surrounded by beautiful agricultural landscape, is one of the most valid reasons to visit Monte Rinaldo. Here there is a sanctuary that can rightly be considered one of the most important monuments of the Hellenistic period in the entire region. It ignores, for now, is the deity to whom it was dedicated, is the city from which it depended.

Archaeological area (second century BC) The exploration, which began in 1957 and not yet over, has brought to light elements, partly reassembled, a porch along 66m. Many found objects of various kinds, such as: fixed wings, lamps, bronze statues and votive offerings related to the cult of the Goddess Cupra (for the Romans or Bona Bona Dea Mater). In the vicinity were found clay statues that adorned the pediment of the temple, traces of an inscription always referred to the worship of Jupiter. Research has shown parts with traces of fire dating back to the events of the Social War that was fought bitterly in soil Piceno.