Overlooking the valley of Tenna to 314 meters high still preserves the ancient walls.

Remains of pre-Roman and Roman settlements unearthed by archaeological excavations of the 80s in Contrada Saa Tiburcio will qualify the area as certainly inhabited in pre medieval.

The old castle dates back to a time prior to the year one thousand; was always this center also disputed between two municipalities opposed such Fermo Montegiorgio and in 1039 perhaps was donated to ‘Abbey Farfa up to enter definitively in the hands of the March 1244 Fermanal.

like other neighboring towns in 1400 the Rocca was occupied lords of Cesena Malatesta then return only sixteen years after soto administration of Fermo and finally under the rule of the Church.

Today the center is the result of a redevelopment eighteenth century occurred during the occupation prancese, before joining the then State Montegiorgese.

In addition to his castle walls of the fourteenth century. Which now retain three towers in a perfect state of conservation you can ‘visit the fifteenth-century Church of St. John the Baptist, patron saint of the town, then rebuilt in the’ 700 that still preserves the original bust of Pope John XVII was born here. 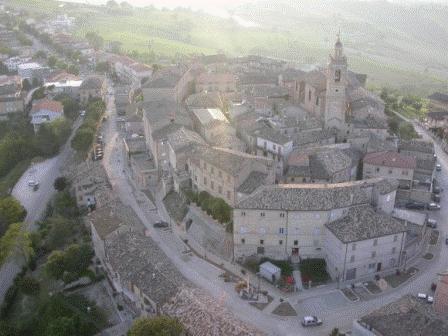 Always a rfacimento century are admirable architectural structures of the Town Hall architect arms and the Church Rural St. Columba as well as the Church of St. Rosalia.

Instead of earlier eras are the Church Rural St. Triburzio dated 1507 and that of St. Anthony of the seventeenth century. All custodians of the art treasures of the Marche and influences from the Adriatic to the north.