Shrouded in mystery is the origin of Penna San Giovanni. The first and oldest memory goes back to 1248, attested by the “Diplomatic Code”. This legal act is somewhat suggestive content. With it the notables of the Castle of Monte San Giovanni result in the sale of the fortress allowing that the population was erected precisely to community. In etymology, we trace the word “Fin” in the Hebrew language, meaning “corner”. Similarly we find in Latin, meaning space more appropriate than “offshore steep” which accurately represents the position of Penna. But the prevailing opinion wants to reconnect the pen name to Celtic: language spoken by populations Spanish-British. Several locations still called by the term pen are placed exactly in the steep hills, in Spain, in Britain and also in northern Italy. On the other hand the name of Apennins would derive from the same linguistic root. The reference to Saint John, made use to differentiate between other “pens”, born from the first temple that Pennesi erected on the height. 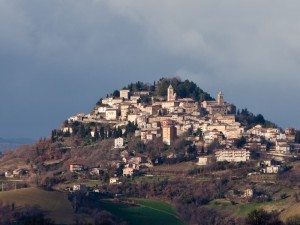 ONE OF THE MOST CONTRADE SUGGESTIVE: Villa Saline

It extends to the river itself. On the banks of the Saline spring water, mineral water salt, bromine and iodine-sulfur natural, whose healing properties were discovered as early as 1876. At the beginning of the twentieth century began to use the waters for therapeutic purposes, but the onset of the war ended exploitation. For several years, thanks to the city administration, is attempting a revival of the spa.