The municipality of Sant’Elpidio a Mare

A long tradition traces its origins from the ashes of Cluana ancient Roman city at the mouth of the river Chienti, destroyed by the Goths in 410 AD. 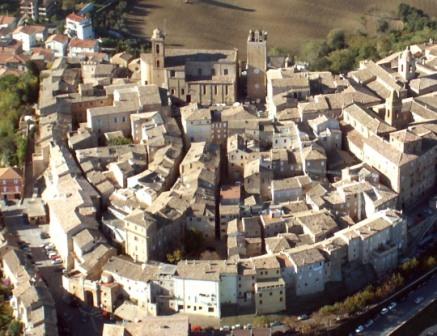 around what veins called “Castle Sant’Elpidio”, in the territory of one of the oldest and most powerful Benedictine abbeys of the Marches, or Holy Cross Chienti to the ninth century. A policy tends antifermana characterize and mark so bloody and tragic his story in the fourteenth century. Of note, in particular, the tremendous destruction in 1377 by the hand of the tyrant stop Rinaldo Monteverde that devastated the city almost totally destroying it and making horrendous massacre. Despite elpidiesi, from 1380, they rebuilt the city on the Colle della Pieve. In 1797 he was one of the few centers of Le Marche who tried to oppose the passage of the troops of General Franco-cisalpine Rusca. In 1828 Pope Leo XII raised the Castle of Sant ‘Elpidio to the rank of town.

Sant’Elpidio a Mare is an important footwear. The creativity, the high degree of specialization of workers and product quality have made famous the name of the town in Italy and abroad. To signal that is headquartered in Sant’Elpidio a Regional School Calzaturiera preparation staff in the local and regional industries.