The origins of Fiastra are remote. Archaeological finds unearthed at various times, testify human settlements since the Neolithic age.

Romanesque age dating the names of Poggio, Trebbio, Fiegni and perhaps Podalla. In the Middle Ages, there was a certain prosperity to the prosperity of pastoralism and the art of wool and being available on-site construction materials, land thickened solids castles. Breathe it soon became the center of scenic geographical and political. IlCastrum Fiastrae, whose origins are remote, however, before the eleventh century, stood on the hill of San Paolo. In the following years Fiastra passed under the rule of King Manfred (1259), the Da Varano (1262), the Sforza (1443) and finally in 1545 under the direct jurisdiction of the Papal States which followed the fortunes. 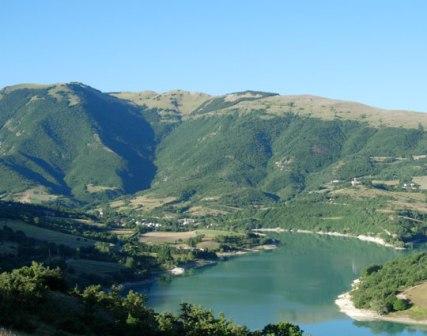 Lake Fiastra, to almost 650 m. of altitude, it is a reservoir created for the production of electrical energy. Its narrow and elongated position, wedged between the Monte Fiegni and the Sibillini, makes it very attractive from the point of view of landscape. It helps make the whole environment lovable, popular with tourists and fishing enthusiasts. The best view of the lake can be enjoyed from the area Delmonte Coglia. In this case, in addition to a wonderful view you have the sensation of being in a wide expanse of meadows, grassy pastures in structure compact and rich in species from multicolored blooms. In particular stands out immediately in the eyes basil (Cachrys ferulacea) that dominates all others, Umbellifers by erect stem and striatum and the many fruits rounded with coasts extended into wings.