It is located at the mouth of the narrow valley of the Chienti, surrounded by mountains and forests. The origin of the country is linked to the union of three nuclei in the vicinity of fate castles of Serravalle, Tufo and Serramula.

The Barrel of Varano (sec. XV) is an important waterworks squared stone. It was commissioned by Giulio Cesare Varano design by Florentine hydraulic engineers to clear the plateau of Colfiorito. The drainage water leak upstream of Serravalle to give life to the river Chienti. 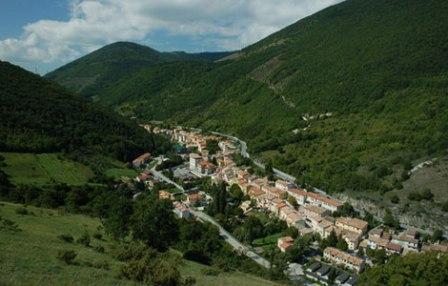 The Roman Tunnel (I cent. BC – I century AD.) Is an artifact along about 1km built for the most part in the gallery with travertine blocks laid on site in dry, inside is up almost 2 m and width 1 m approx. Work intended to ensure a controlled flow of the waters of the plain of Colfiorito, was discovered as a result of construction of the new spillway for the water of the plain, it made necessary due to the partial obstruction, due to the earthquake of 1997, the “barrel Varano “.

The Basilica of Plestia of extraordinary interest, is on early Christian crypt and on the ruins of the Roman temple of which were recovered building materials. Nearby numerous remains of the Roman city of Plestia which perhaps had its origin Serravalle. The name is also known for the battle of the Romans with Hannibal.