The origins of Moorish little is known. The territory in Roman times stood important settlements and, in the Lombard period, “curtes and castrates” monastic and feudal. Likewise, little is known of the origin of the name, if it derives from a gentleman named Morico or the place name “Morro” which stands for “rocky ground and even swampy”.

A count, Theobald of Moorish, appears in the documents of the twelfth century and in the next century, the castle passed into ownership to the city of Fermo. It is removed from Frederick II and later by King Manfredi. 1266 will be the castle of Fermo until the unification of Italy, with a brief period during the Napoleonic period. In 1869, he lost the municipal autonomy and become fraction of Monterubbiano until, in 1910, will return to be autonomous. 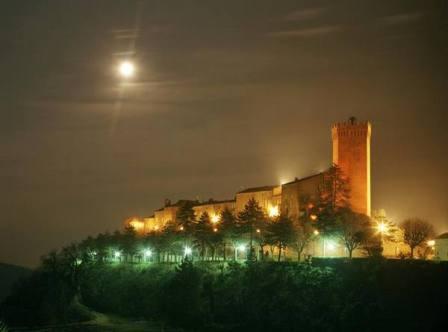 The heptagonal tower (XII century), 25 meters high, dominates the Aso valley. Originally built as a watchtower and defense, he has undergone over the centuries many deep structural changes. Inside it was built a modern staircase, from above, it allows a wonderful view of the entire landscape of hills, landscapes and country Piceno. The Tower can be visited throughout the year.