And ‘it established opinion that Force have originated around the fifth century AD the allocation of the populations of neighboring plains to escape the barbarian invasions of the Goths and the Lombards.

Collegiate Church of St. Paul the Apostle (seventeenth century) houses the miraculous crucifix which is dedicated to the celebration of August. The statue is traditionally kept in a closed altar in a beautiful lattice wrought iron and gilded, the work of renowned artist Francesco Tartufoli Piceno (1742-1818). Decorated with frescoes and paintings from the fifteenth and sixteenth centuries.

Town Hall (XVIII century) with the elegant Tower Civica.Palazzo Priory (XVI century) with loggias and arcades. Church of St. Thaddeus contains a wooden sculpture of the sixteenth century. Church of St. Francis (XIX century) rebuilt on the existing church of which only the bell tower. Church of Mount Noro 3 km from the town, houses a processional Corce sixteenth century. Sanctuary of Blessed Assunta Pallotta; Cottage Verrucci made by the owner as architect of King Farouk of Egypt. 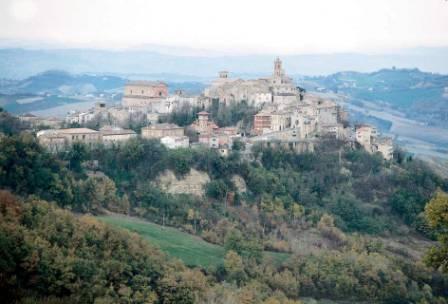 Force has a reputation to artistic copper, to those “tinkers” who in their workshops cloudy with sparkling forges, for over half a millennium forge copper objects household and ornamental. The beginning of this activity is uncertain, in the sixteenth century in S. Salvatore, Farfa monks built a mallet for copper processing crude.

Entering in the shops what is surprising is the large number of hammers that they are preserved; copper it is purchased in the form of sheet or hollow, hence using real hammers unusual for their shape, craftsmen derive these magnificent artifacts.