The most striking lead us to the ancient Vallentia: MORROVALLE! The more realistic the Carolingian period as a defense in the fight against their enemies.

The first document, however, mentions that this territory is about Ministerium de Valle: the next one in 1335 in Murri de Valli and later Castrum de Murro: always in a fortification. It was the center of some importance, as to be between the civitates superiorem not cognoscentes: like a small sovereign state, with the right to coin money and to elect, since 1300, its official. It was among the first municipalities to think of a pawnbroker and since 1447 it was equipped with its own statutes. With ups and downs, in the struggles of the time, he found himself now with the Guelphs, now with the Ghibellines. Later he belonged to the Church and then to the Kingdom of Italy.

Villa Pace Leopardi Patrizi: neoclassical, has belonged to the Counts Grisei, noble morrovallesi who have donated to the fight for the unification of Italy youthful energies and intellectual contribution of great value. 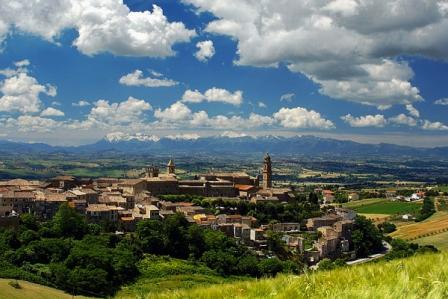 And ‘it situated on a hill in the center of the valleys of Chienti and the slot. The villa was originally a hunting lodge. Around: a small church, a dependence-habitation for the gardener and other buildings modest. The park is planted with trees everywhere.

Museo Civico Pinacoteca Palazzo Lazzarini: recently renovated the building belongs to the noble family of the counts Lazzarini who would descend from the dynasty Guarnieri. Particularly interesting is the magnificent facade, the portal and battlements impression Ghibellines, who returned to shine in their late Gothic style. The interior has large rooms which have been set up: a gallery-museum, the library and other spaces used for conferences and exhibitions.