Offida is located on the hills between the rivers Tesino and Tronto, about 20 km from San Benedetto del Tronto. And ‘a country of ancient and charming appearance. 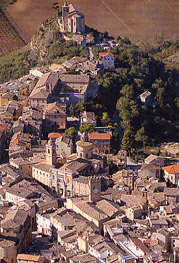 The testimonies of the first settlements concerning the Neolithic era; near the present settlement are rinveute necropolis dating back to the Piceni and the Romans and a shrine dedicated to “Ophys” or Golden Snake Offida from which it derives its name and its wonderful theater. The country has maintained the tradition of craftsmanship made of precious lace pillow.

The main monuments to visit are the Town Hall with a porch, a loggia and a fourteenth century tower of the fifteenth century; S. Maria della Rocca, a Romanesque-Gothic church of the XIV century with a crypt with frescoes fourteenth just outside the intact walls; the picturesque medieval streets of the historic center and the main square with its distinctive triangular shape. Offida is also known for its carnival, for food and wine, for its many wineries and is also home to the prestigious Enoteca Regionale delle Marche.