The origins of Petritoli are lost in the mists of time.

The oldest traces us back to the era of the great Roman Empire:

the two urns of the I – II century, the milestone dating back to Emperor Magnentius and the ancient source in the district Papagnano speak of a community that has long inhabited the area surrounding the current center. Petritoli was founded by monks of Farfa in the tenth century with the name of Castel Rodolfo. Passed under Transarico Baron Saltareccia, was ceded to the Bishop of Fermo in 1055. Since 1198, he ruled with their own statutes until the conquest, in 1250, Frederick II, who sold it to Fermo, imperial ally. After ups and downs, which saw sieges and destruction, alternating with periods of relative autonomy with periods of submission to Fermo, under Napoleon held the title of Canton, participating actively in the subsequent uprisings. 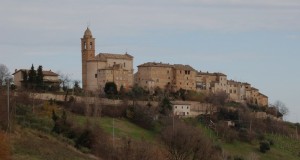 Petritoli name derives from the merger of the three castles of Petrosa, Petrania and Petrollavia, but the etymology is controversial, as such names are referable to three villages and its streets were built outside the walls of the castle. Through three pointed arches nineteenth century, enclosed by two towers of the fifteenth century, leads to the old village. The former convent of the Poor Clares, now the Town Hall, in a room of the interior retains a wooden choir of the XVII century. The Civic Tower was built in 1800. In the main course is the twentieth century Palazzo Vitali Rosati, in Venetian Gothic style. Next is the Iris Theatre (1873-77), built and designed by Giuseppe Sabbatini. Outside the old town, it is the former convent of the Minor, now used as a health center, the adjacent church, with a coffered ceiling century octagonal stained with egg yolk tempera, contains an organ Callido.